The Poignancy of the Tortellino 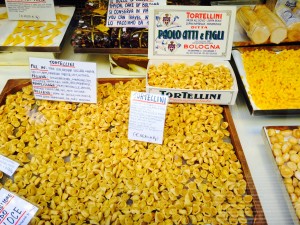 When a Tortellino-making competition (The Tortellino Challenge: Bologna Versus Modena) is presided over by Massimo Bottura, chef and culinary artist, 3 Michelin stars, winner of the Global Gastronomy Award 2014 and no. 3 on the San Pellegrino list of the 50 World’s Best Restaurants, you know that the Tortellino is serious stuff.

Last January, the Palazzo Re Enzo located in Bologna’s epicentre and one of the city’s most prestigious locations, hosted a Tortellino-making competition. The challenge was not simply to identify the chef who made the best Tortellino, but which province, Modena or Bologna (and its chefs) made the finest example of this culinary jewel both in a traditional and creative version. After several qualifying heats, 5 chefs from each province were selected to participate in the grand ‘finale’ for both the creative and traditional Tortellino, after which three winners were declared from each category.

However, what interests us here at Yummy Italy, seeing as our primary mission is to divulge the culinary authenticity of Emilia Romagna (and when we’ve mastered that we can get creative), is to explore the history and the fascination surrounding the Tortellino. 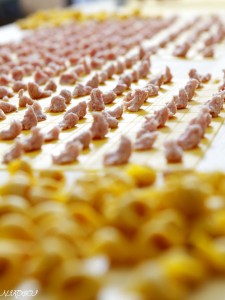 Tortellini in the making

A myriad of versions of a ‘type’ of Tortellino, a tiny knot of pasta filled with anything from cheese to mushrooms, available in a ‘dried’, ‘quick’, ‘canned’ and sometimes even handmade form can be found in supermarkets, specialist Italian food shops and delicatessens all over the world.

Alessandro Cervellati, the founder of the Learned Brotherhood of the Tortellino (la Dotta Confraternità del Tortellino’) – an association founded in 1965 to preserve the authenticity of the Tortellino – and yes, there is such a thing – described the Tortellino as “a sensual intercourse between the loveliness of a woman and a gastronomic masterpiece”.  And here he refers not to all those bastardised versions floating around in industrial production plants, but to the one and only definitive and authentic version, whose recipe, in keeping with Italian and, in particular, Emilian culinary traditions, was actually deposited at the Chamber of Commerce in Bologna in 1974 by the Learned Brotherhood of the Tortellino.

And it is not only the recipe for the Tortellino itself which is sacred, but also the broth in which the Tortellini are cooked. The ‘perfect’ Tortellino should weigh 5 grams, the pasta dough should be rolled out with a rolling-pin, and whether the filling should be cooked or raw remains a continuous bone of contention between Modena and Bologna. The ‘authentic’ broth must be made with a free-range capon and not a chicken.

In the past, there was a great deal of controversy surrounding the birthplace of the Tortellino and after many heated discussions, Castelfranco Emilia was chosen, a small town on the Via Emilia and half way between Modena and Bologna and where, according to traditional folklore, the Osteria which invented the Tortellino was actually based.

Castelfranco Emilia, however, was not a fortuitous choice because until 1927 it belonged to Bologna while it was still a part of the Estense Dukedom, but after this date became a part of the Modena province. However, to this day, Castelfranco Emilia remains under the Roman Catholic Diocese of Bologna. As a result, this little town which, despite its Modenese identity, continues to cling to its Bolognese roots,  appears to be the politically correct choice, representing a kind of culinary bridge between the two competing provinces.

There are a number of stories surrounding the conception of the Tortellino, but the following, dating back several hundred years, is my favourite and probably the most popular:

‘Around the year 1200, on a hot day, a wealthy and beautiful and elegant lady arrived in a carriage drawn by four horses which stopped at the Locanda della Dogana in Castelfranco, (the customs gate) seeking rest, food and shelter. The eyes of all the customers in the Locanda were upon the lady while the inn-keeper showed her to her chamber.  She, a rare and gracious vision of loveliness, bowed her head to everyone as she passed.  The inn-keeper showed her into a chamber reserved only for the most noble of visitors, a lovely and cool room, protected from the heat by the surrounding trees. As the door closed, the inn-keeper and cook of the locanda, was afflicted by a delicious thought: to remain outside the lady’s door and observe her through the keyhole, whereby the lady, for the pleasure of the inn-keeper’s eyes, took off her clothes to reveal a fresh and soft body. In her softness appeared a round, delicate and pink navel more beautiful than any the inn-keeper had ever seen. He quickly ran to the kitchen, took some dough and sculpted it into the shape of the perfect navel he had just seen. However, after it had been cooked in boiling broth, the small navel still remained hard between his teeth.  Not put off by his first failure, the cook and inn-keeper decided to try another version. First he cut a small and thin square of pastry and filled it with condiments he had in his kitchen which he used for other dishes, again creating the form of the lady’s navel. He cooked it and as the taste pleased him, he made many more which he served the lady that very evening. The dish was very much to her liking and when she begged the inn-keeper to reveal the recipe, he turned very red from his neck to his head, and was only able to reply – “the recipe is all thanks to you, my Lady”.’

But what is it about Tortellini in Brodo that is so fascinating? Why is it that all the inhabitants of Bologna and Modena are obsessed? Why is it that even small children argue over whose ‘Nonna’ makes the best and a wedding isn’t a wedding without them?  Why is it that people can spend an entire lunchtime and beyond, discussing the merits of the Tortellino? And what is it that makes them so completely sensual? 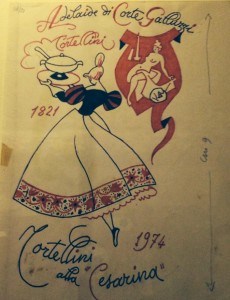 I thought I would quote some thoughts from a non-Italian, the food and wine journalist ‘par excellence’, David Rosengarten, who has truly grasped the essence of this dish:

“On to the real star of the day; the one thing I saw on this Sunday at every table, was steaming bowls of Tortellini in Brodo.  And this is where I fell in love…. I’d never responded before to this dish in this way; my old feeling was ‘why should I have these little dumplings in soup when I can have them in a proper sauce?’…. You come to understand that the real richness is in the center of the dumpling – a mixture typically made of minced pork, mortadella, Parmesan cheese and spices (nutmeg). One little bite is like a bomb of flavor…  each dumpling explodes in your mouth, to be gently moistened by the broth that surrounds it, not to be bathed in sauce. It helps if the broth is a great one – which, again, speaks of subtlety (capon stock is the traditional base for the broth). In a perfect slurp of this thing, the resilient pasta yields gently to your teeth, whilst the filling meets the broth in a moment that can only be described as poignant. There is not much to do but sigh, and dip your large spoon in for more”.  Indeed. 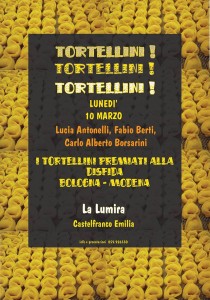 Winners of the Tortellino Challenge

And so, on 10 March 2014 , 80 people gathered together in one small restaurant in Castelfranco Emilia, to taste the three winning versions of Tortellini in Brodo. Heaven in a bowl, 240 times over. And who were all those people who came to eat Tortellini in Brodo? Foodies, award-winning chefs, vineyard owners, Learned Brotherhood of the Tortellino members, a mayor or two and anyone else who was quick enough to make a reservation before seats sold out.

For anyone not used to the intensity and seriousness that Italians and Emilians in particular consider their food, it could have seemed a comical evening. 80 people analysing a bowl full of yellow-ish dumplings in broth. First they peer at the broth and inhale its scent. What colour is it? Pale or dark yellow? If it is paler, then will it have been cooked long enough? What about the amount of fat? Is there are large, single blog of fat on the surface, or are there a larger number of smaller blobs? How clear is the broth? If it is too clear, then the filling of the Tortellini will already have been cooked. How intense is its smell? How tasty is the broth? Will it overwhelm the taste of the Tortellini? Then the Tortellini themselves; how yellow is the dough? The eggs will have had a very yellow yolk. Then people rolling around them around on their tongues. Are they completely smooth or slightly rough to the touch? If they are slightly rough then they the pasta dough will have been made with a rolling-pin. Then everyone pressing the Tortellini to their upper palate with their tongues– that way they can assess how thick the pastry is. And finally, a Tortellino ends up between their teeth. And the flavour? Enough Parmesan? Mortadella, yes or no? Is there enough nutmeg? And salt? Does the flavour of the filling burst in the mouth and balance perfectly with the broth?  And so it went on and the evening ended with 240 bowls of Tortellini having been analysed in every possible detail. 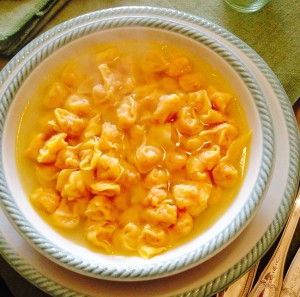 As I sat at one of the long tables, ‘osteria-style’, with about 19 other people all reflecting on the virtues of the Tortellino, all agreeing that the ‘definitive’ restaurant Tortellini had been found and all celebrating the Tortellino in its most traditional form, there was a moment when people stopped eating and sat still for a moment. And it was that moment that was poignant – because it was when the men and women at the long wooden tables stopped to compare the Tortellini on their tables to their mothers’ or grandmothers’ offerings.  And for a few seconds, everyone was taken back to their childhood, to a Sunday lunch with their families that began, as a baptism, with a bowl of steaming broth filled with the tiniest of meat dumplings which for each person there, will always continue to be the best. 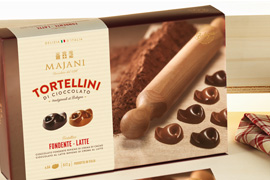 But we’ll keep those for our coffee after dinner.

Winners of the Bologna vs. Modena Tortellino Challenge:

Last, but not least, thanks to Carlo Alberto Borsarini, chef and owner of the Ristorante La Lumira in Castelfranco Emilia for the revised document detailing the history of the Tortellino.